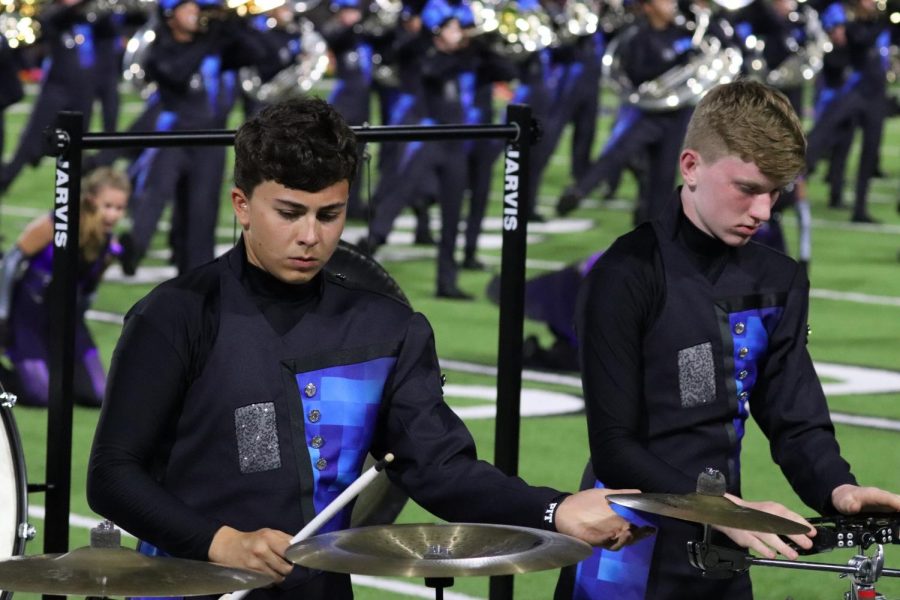 Members of the front ensemble play with the band during halftime.

Despite the intense heat of the baking sun and the complexity of the music and drills, band students push to learn and grasp everything thrown at them. This year poses a challenge unlike previous shows, as the band theme, The Day the Music Died, adds a layer of difficulty and seriousness to the program.

Centered around composers and artists that died young, this year’s show brings together traditional, classical music with more modern pieces.

Due to the subject matter, the show is darker than others the band has put on.

“It feels a lot more serious and dark compared to what I’ve done the past three years,” senior Isaiah Johnson said.

Most are used to seeing the finished product, but a lot happens behind the scenes in order to create the show.

“We begin drafting in November or December with the staff and our design team,” Easton said. “We bounce around different ideas until we land on one that works.”

Since the music will include some modern pieces, Easton expects there to be significant crowd appeal.

“There are some places in the show with well-known music,” Easton said. “Hopefully the audience will recognize it and enjoy what the kids are doing.”

Along with the audience, members of the band are familiar with the music.

“I love this theme because I have loved the song ‘American Pie’ for the longest time,” senior drum major Blaise Alfredson said. “The song being in the show is just incredible.”

Alfredson looks forward to sharing what the band has worked towards with others.

“I’m really excited to show everyone how every aspect of art itself is being represented,” Alfredson said. “We have gravestones with musicians who died, and a portion where we sing, so that’ll be cool to perform.”

As a senior, he has now experienced four different shows, and sees this one as the most historic and relatable yet.

“Our contest season is just starting and we still have a long way to go, but I’m ecstatic to perform for the masses,” Alfredson said. “It’s something you wouldn’t want to miss.”