Students prep for the premiere of the biannual fine arts musical. 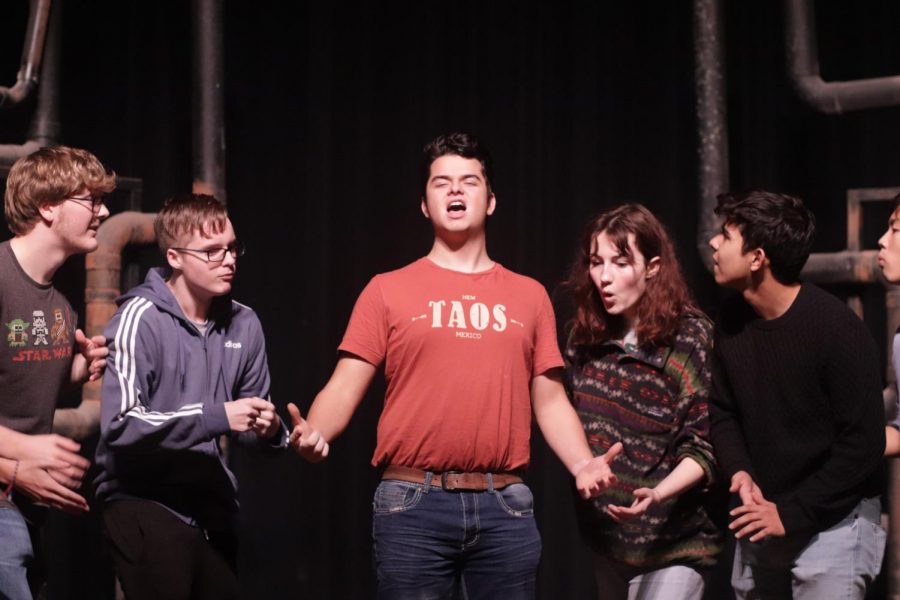 Members of the musical cast act out a scene at rehearsal.

The fine arts departments have come together to bring to the stage the classic and award winning Broadway musical “Guys and Dolls” this Thursday, Friday, Saturday, and Monday.

“The bond the cast and crew have formed to bring this to life is incredible,” senior and lead Harli Daniel said. “It’s something the whole department can be proud of.”

The musical follows the story of New York gambler Nathan Detroit attempting to evade the police all while organizing crap games and challenging Sky Masterson to get money.

“We’re actually friends; not at each other’s throats,” junior Patrick Realyvasquez, who plays the role of Nathan Detroit, said. “I just need his money.”

The comedy also highlights the four leads relationship drama. Miss Adelaide, played by junior Lucy Lammons, insists on marriage with a troubled Nathan, who has issues aligning his priorities, causing romantic strain between the two.

“My character is fun and ditzy but very capable of getting serious with Nathan,” Lammons said.

“Sky teaches her how to love and proves to her that it is not a sin,” Daniel said.

The musical has been in the works since last year, starting with a production meeting in April all the way through casting and auditions, script read-throughs, and rehearsals.

“We start working on the production a year in advance to plan everything,” band director Andy Easton said.

Band and orchestra students make up the pit, accompanying the actors with live music. They began rehearsing last semester and stay after school three times a week to perfect the performance.

“We got the music in November and have been rehearsing nonstop since we got back from winter break,” Easton said.

All departments involved in the musical have given up hours of their time to put the show together. The cast, tech crew, and musicians rehearse several hours after school and spent much of their vacation time dedicated to the show.

“We’ve sacrificed a lot of our breaks to make this work,” Daniel said. “But in the end it will be worth it.”

Months of dedication will be open to the public this weekend for $20. Tickets will be sold at the door.

“I’m super excited to perform in front of everyone,” senior and lead Enrique Funes said. “I hope everyone can enjoy it.”