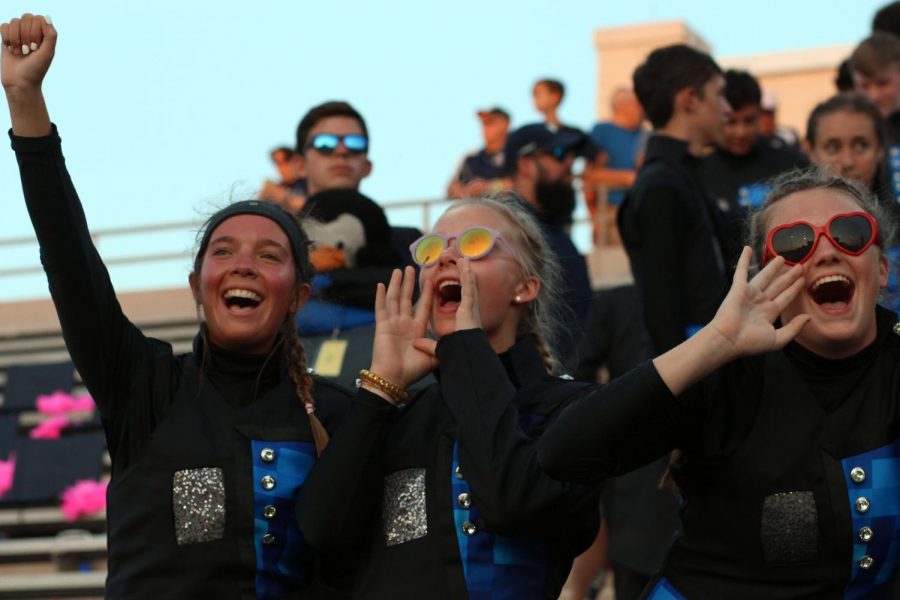 Band members cheer in the stands as the team scores.

These words from head band director Andy Easton set the mood as thousands of stadium fans looked to the field with intensity, watching the clock run down.

Saturday, the Wildcat varsity football team beat Cy Lakes in what became the most high-energy, high-scoring, stressful game of the season.

“It was a back and forth non-stop showcase of offense,” offensive line coach Scott Weismann said.

Quarterback Colton Marwill assisted in the winning touchdown with a 22-yard touchdown pass to wide receiver Logan Kyle with 22 seconds remaining in the fourth quarter.

There was no doubt in my mind we were going to score.”

“There was no doubt in my mind we were going to score,” Marwill said. “I’m really proud that we didn’t give up.”

The audience was filled with tension as Marwill threw the ball to Kyle. Faces of fans and coaches alike were visibly anxious in much of the game’s final minutes.

“Since it was a back and forth game I was nervous that we were not going to catch it,” senior and clarinet player Erin Stanko said. “I was very excited when we caught it.”

The game started like many others. The Wildcats were down by three points at halftime, but once the last quarter hit, a fateful offensive showdown began to unfold. In the last two minutes, four touchdowns were scored (out of 20 in the whole game), and through it all, blistering marching band chords meshed with audience yells to fill the stadium with intensity.

“I wanted to stop playing since band had played through the whole fourth quarter,” Stanko said. “I was nervous and wanted to watch the game.”

I wanted to stop playing since band had played through the whole fourth quarter.”

Each time either team’s offense was in possession of the ball they scored, making it a close game.

“The offense was well prepared,” Wiesmann said. “They made adjustments throughout the game to counter what defense was doing.”

At one point fans believed Cy Lakes had intercepted the ball, but it was flagged as pass interference.

“I knew right away we were getting the ball back,” Weismann said.

From that point on, Wildcat defense had to hold off the Spartan offense for another 19 seconds.

“I was hoping the defense would be able to get a stop,” Marwill said.

Marwill scored a total seven touchdowns and junior Joseph Manjack had three, helping to secure the win. These 10 touchdowns formed the basis of the season’s highest scoring game.

“I’m really proud of how we did,” Marwill said. “We believed in ourselves the whole game.”