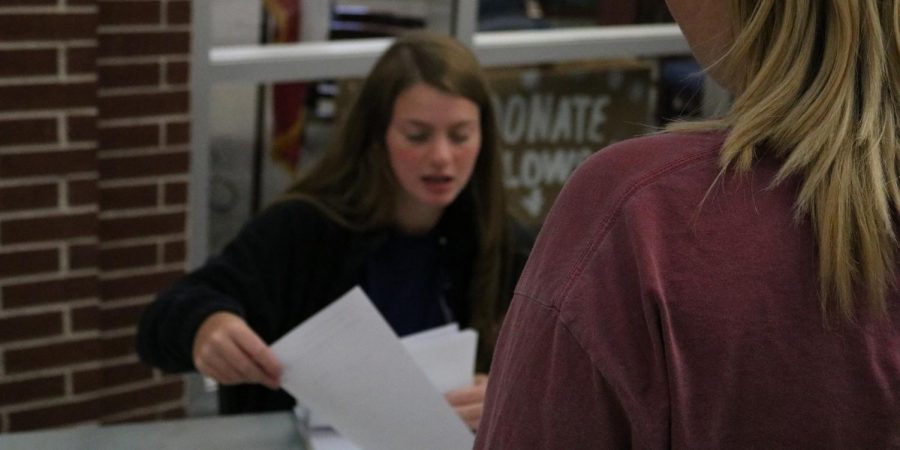 “Don’t limit yourself,” Craige said. “You’re probably getting a lot of junk mail and laughing at it, but if something speaks to you, research it. I’d never heard of Fordham until they gave me a free application, so I applied and they offered full tuition.”

DeSplinter advises students to finish taking the SAT and ACT early in junior year, leaving time to focus summer and senior year on applications.  Students can request recommendations as early as May of junior year, even without knowing where they’d like to apply.

All three agree essays are the most time-consuming part of applications. Whether it’s a long essay or the supplements, however, the three said essays are important, and advise students not to simply summarize their resumes.

“They’re those generic prompts we used to laugh at in fourth grade,” Craige said. “You have to think of what will make you stand out if they read your essay in depth, and you just go from there.”

The seniors also advise underclassmen to get multiple sources, such as friends, teachers or the internet, to read over their essays.

Recommendations are another core aspect of applications. While they’re simple to obtain, it’s important to avoid confusion.

“Colleges will say you need two letters of rec from a core teacher so I thought that meant if I got a letter from Mr. Easton, someone who knows me really well, that would be useless,” DeSplinter said. “But almost every college has the opportunity for additional letters from any member of the community.”

While many find their dream schools early on, deciding where to apply is often a challenge. College visits and the College Board Big Future website both helped seniors narrow down their college lists.

“Start doing scholarships as soon as possible because college is expensive,” Malhotra said. “With the schools you’re applying to, some of them can have programs that aren’t as known, but if you do some digging on their website you can find really cool programs.”

For those looking to attend school outside of Texas, college can be more expensive, but applying to the right schools and scholarships can alleviate financial burdens.

“If you’re looking to go out of state, your best bet is applying to a smaller liberal arts school versus the big public school because they’re more likely to give you a scholarship,” DeSplinter said. ”I really didn’t start looking for scholarships until late March and most local scholarships deadlines had already passed. Still, you’ll get a bigger scholarship from the school if you apply to the right school.”

Extracurriculars are another important factor in the college application process, but the seniors agree quality trumps quantity. According to DeSplinter, it’s most beneficial to display consistent involvement and commitment in one’s applications.

“Quitting band helped me a lot for senior year since I was way less stressed,” Craige said. “For extracurriculars, it was finding my life in journalism and putting myself into it. Not just doing newspaper but also doing photography, taking a class period to teach journalism kids last year, and this year doing independent study, all showed that I’m committed to it.”

The seniors agree their most successful applications were able to stand out amidst a sea of faceless applicants.

“I have three citizenships, so I showed that I’ve traveled and love learning languages and history,” Craige said. “Try to make yourself as unique as possible.”

While application season can be stressful, the seniors all agree that with strong time management and consistent work, it doesn’t have to be a nightmare.

“It sounds so cheesy but everything will work itself out,” Malhotra said. “Even though you’re super stressed during the process, there’s going to be a school that likes you.”