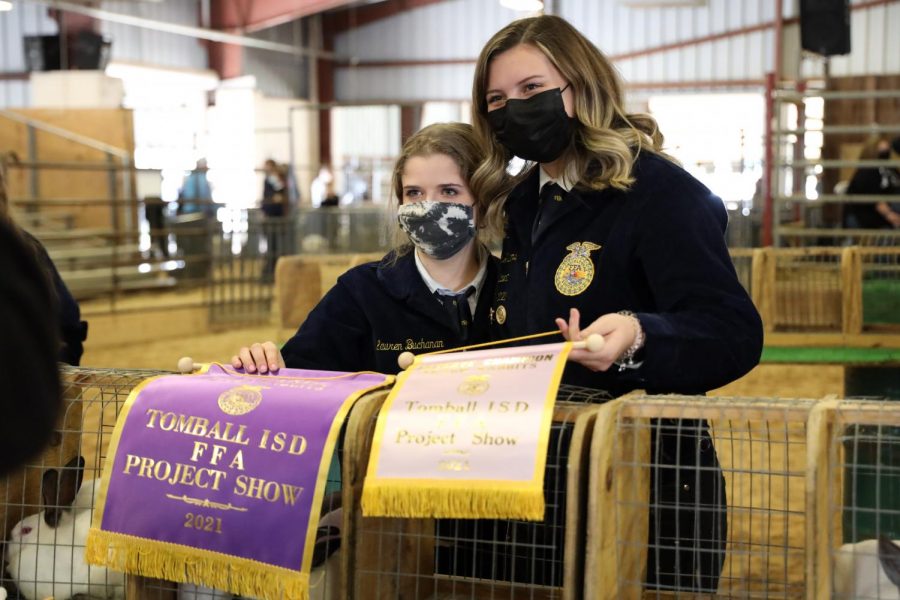 Students who received special recognition at the TISD Livestock Show and Sale last week include Grand Champion Rabbits Lauren Buchanan, Reserve Champion Rabbits Grace Williams, and Reserve Champion Turkey Reese Jones.
“I had never received a really big accomplishment,” Buchanan said. “I never believed hard work paid off, but I believed, worked my hardest and got somewhere.”
Students dedicated much of their time to prepare for the annual show by feeding, exercising and creating a bond with their animals.
“I went up to the barn after school every day to walk my turkeys around,” freshman Reese Jones said. “I’d be up there for two or three hours.”
Friendships began through FFA when people helped each other split feed or watched over a quarantined friend’s animal.
“I made connections with people,” Buchanan said. “Getting tips from other people and having my friends help me made this year so much easier.”
Family support aided many students in their success at the show as well.
“This was the first year my family raised turkeys,” Jones said. “During the day, my mom went up to the barn to stir my animals which meant they ate more.”
With the social distancing regulations, it remained uncertain if the Livestock Show would take place. Regardless, both students and teachers dedicated their time and energy to FFA.
“It was awesome to know that something I put work and time into came to fruition of something good,” senior Grace Williams said. “My hard work paid off, and my senior year came to a good close after a weird year.”
Students earned money at the live auction to dedicate towards college. In addition, FFA members were rewarded with social networks within Tomball.
“I came to know a lot more people in agriculture by talking to buyers and raisers,” Williams said. “The camaraderie that came from being in FFA and helping other people raise their animals was a rewarding experience.”
Despite the improvisation of raising animals and trying to have a show in a COVID environment, students pushed to achieve their best at the show.
“We are overwhelmingly proud of all of our show students since this year was really tough,” FFA advisor Theresa Farthing said. “There were many ups and downs, but students worked hard, followed the protocols and had a successful raising and show season.”